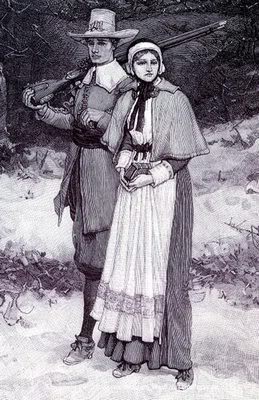 How can we restore America? By recovering the original Pilgrim and Puritan vision of America as a shining “city upon a hill.”

Those first Christian settlers who stepped ashore on the beaches of Massachusetts were not just a bunch of religious refugees who came over here to avoid persecution. They had a compelling vision: to put the Bible into practice and create a self-governing society with liberty and justice for every soul. They were missionaries, intent on creating a Bible-based commonwealth that would be an example to the rest of the world — that would, as Abraham Lincoln would later phrase it, “hold out a beacon of hope to all men of all time to come.”

But we have lost that vision — we seem to no longer know who we are or why we are here. We seem to have developed a serious case of national amnesia, a loss of our collective memory. That means that in order to restore America we have to recover the truth about America’s Christian heritage, and God’s hand in our history. For example, Patrick Henry, a great Founding Father, and one of the strongest evangelical Christians of his time, said that “It can not be too often repeated, or too strongly emphasized that America was not founded by religionists nor on any religion, but by Christians on the Gospel of Jesus Christ.” This is a statement that never shows up in the history books that are read by the vast majority of American schoolchildren. John Adams, our second President and a true son of the Puritans, spoke for all the Founding Fathers when he spoke these words to the Massachusetts Militia in 1798: “Our Constitution was made only for a moral and religious people. It is wholly inadequate to the government of any other.”

Adams is telling us is that unless we have a rebirth of the Spirit of God in each new generation of Americans, our Constitution will not work, and we will not be able to have a society with liberty and justice for all. Why? The simple reason is that in order to have a just society we have to care for our neighbor. But the Bible tells us that every human being is born with a sinful and fallen nature — we are by nature self-centered. So, in order for us to care about our neighbors we need an infusion of the Spirit of God that will get us out of our natural self-centeredness. That is why we need revival in each generation of Americans.

But, our society’s moral and spiritual crisis is so desperate that we need a nation-wide revival of such historic proportions that it could be called the Third Great Awakening.

How can we get such a spiritual revival? We must put 2 Chronicles 7:14 into practice. That verse says: “If my people, who are called by my name, will humble themselves, and pray and seek my face, and turn from their wicked ways, then I will hear from heaven, and forgive their sin, and heal their land.” (2 Chronicles 7:14).

This scripture clearly puts the burden of restoring America on the Church — “my people!” Revival must start with the recovery of the dynamic power of true New Testament Christianity in our local churches and fellowships.

When God’s people begin to seriously live out His call to repentance in 2 Chronicles 7:14, I believe that we will discover three main areas of “wicked ways” that we must repent of. If we deal with these, God promises that He will heal our land.

Initially, we Christians need to repent for our shallow superficial “churchianity” — our “feel good” resistance to facing our own sinfulness and seeking daily the cleansing power of Jesus to change our hearts. Modern American churches seem to focus on everything except the main point of the Christian life — daily seeking to abide in Jesus, and to be cleansed from sin and self.

Next, we Christians must repent for our lack of honest, confessional, and caring relationships with each other in our fellowships and churches. The New Testament calls for us to confess our sins to each other (James 5:16) and “wash each other’s feet” (John 13:14-15), as did the Early Church. But most believers in Christ are not living with each other in these ways, for if we were, the Church would be impacting our society with the restoration of Biblical values, as the Early Church impacted theirs. Sadly, the Church is not often being the Church!

Finally, we Christians must repent for decades of non-involvement in the society around us. Because American Christians have lost the Biblical vision of the Church reforming society, most of us are still in a defensive posture toward the world around us, whereas Jesus calls us to take the offensive. He tells us to go into the world with the Good News of the Gospel. We must recover the zeal of our evangelical forefathers, who in the 19th century began new ministries to every social problem in the nation! When Christians begin to build together a new life focused on Jesus as Savior and Lord, they experience an explosion of outreach and ministry and mission from their midst. The New Testament teaches that ministry comes out of a shared life in Christ!

Notice that there seems to be a natural progression through these three stages, which together make up God’s plan for revival and restoring America (see Acts, Chapter 2).

Is there hope for America? Yes! Turning things around doesn’t require every citizen’s response. God promised Abraham long ago that He would spare Sodom on behalf of ten righteous people, a tiny remnant. But our national healing will not automatically happen just because we pray for it. If we American Christians truly respond to God’s call, we may yet see the nation-wide revival that will restore America. But the hour is late, and we must respond quickly.
Peter Marshall Ministries