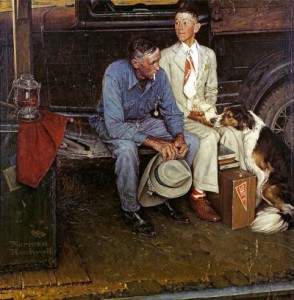 I found this inspiring poem at Sofine’s Joyful Moments website.  This character building poem is one that  could be read, discussed and used as a copywork lesson.

A man doesn’t whine at his losses,
A man doesn’t whimper and fret,
Or rail at the weight of his crosses
And ask life to rear him a pet.
A man doesn’t grudgingly labor
Or look upon toil as a blight;
A man doesn’t sneer at his neighbor
Or sneak from a cause that is right.
A man doesn’t sulk when another
Succeeds where his efforts have failed;
Doesn’t keep all his praise for the brother
Whose glory is publicly hailed;
And pass by the weak and the humble
As though they were not of his clay;
A man doesn’t ceaselessly grumble
When things are not going his way.
A man looks on woman as tender
And gentle, and stands at her side
At all times to guard and defend her,
And never to scorn or deride.
A man looks on life as a mission.
To serve, just so far as he can;
A man holds his noblest ambition
On earth is to live as a man.