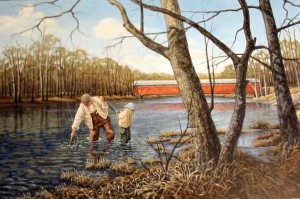 A few years ago,  I had a conversation with one of my nephews that I found very discouraging.  Our discussion turned to cars and I asked him if he knew how to change his oil or do simple maintenance on his new car?  His reply was  “I’ll just pay someone to do all that; I don’t want to get my hands dirty.”   I thought to myself ” What!”  What are you thinking? If you don’t know anything about your car how are you going to know if the mechanic is telling you the truth about the repair he’s just done.   This is something I found very disturbing,  not only then but now.   I also see it as a trend that most young people today seem to look down on those people who make their living working in “blue collar jobs.”   Many simply want to sit in an office all day and make big paychecks, but they for the life of them can’t change a faucet or install a spark plug.  The fact is that the “Blue Collar” guys are going to own you if you can’t even do simple things for yourself.

I remember watching an episode of a TV show called” Frasier.” The episode was called “Seat Of Power.”  In this episode Dr.  Crane played by David Hyde Pierce is talking with a plumber who also happened to be  the bully who terrorized him in school.  He  was trying to show how successful he was by telling him he owned a very expensive brand of car. The most amusing part of the scene was that the plumber used to own the same car as the doctor, but found it to small so he bought the bigger model.

My point here is that the plumber probably made just as much as the Dr.  in this case.  Yet the trades are something we’ve been discouraging instead of encouraging over the years.   This is something that needs to change because hard working people  should never be looked down upon but instead be seen as having a job that is just as valid an occupation as one held by someone with a degree.  The other point is that even if you have a degree, you should be able to do simple repairs.  It’s something our fathers and grandfathers did all the time and it’s an art that’s being lost.

Growing up my father had a job that is known as a millwright.    My Dad  could fix just about anything he could get his hands on, and while he only held a High School diploma (a diploma that he actually earned after I was born), he was well respected by those who made much more than he ever could.

I remember when ever he was fixing something around the house or building a race car (something he also did) , he was always putting tools into my hands telling me to “tighten  this or hold that.”   I learned by doing, not by watching a TV show but by actually getting dirty.  By doing so,  I picked up many of the skills that would serve me so well later in life.  My father,  like many others of the WWII generation  are now gone,  but there isn’t a day that  goes by when I  pick up a wrench or have to fix something that I don’t stop and remember those days as a boy, listening to the instructions of my dad.  My thoughts go to him and I say to myself “Thanks Dad.”   As a father of  two boys,  I’m determined to raise  young men that can do the same.  I think my Dad would be proud.

This past Christmas  I purchased each of my boys their own toolbox and began their own collection of tools.  The other day my boys called me at the office because they were trying to fix a windmill that was damaged when the city tree trimmers dropped a large branch on it and bent the rear boom.  They had already disassembled it and were trying to figure out how they would straighten the metal boom.  I told them how I would fix it and upon arriving home I found the windmill was still apart but the metal boom was straight!  The boys said, “We did what you told us  and it worked great, but we can’t get it back together.”  That was fine with me because we could work on that together.  I’m proud that they were able to get this far on their own.

While my trade is electronics and computers,  I don’t mind getting greasy.  I  love to work on cars.  There is something about hearing a motor roar back to life that gives you a good feeling inside.  I hope my boys and I can build a Hot Rod together someday.  Not to race but simply go for drives, or to just hang out in the garage and work on  it together.  Hopefully, this will allow me to hand down some of what I know,  while having some  good ol’  father  son conversations about the Bible,  how to gap a spark plug, or whatever else comes up.  Just making memories with my boys will be enough for me.  I would be so happy to have  my boys  one day, when they are older,  to look at something they’ve just fixed with their sons and say to themselves  “Thanks Dad.”