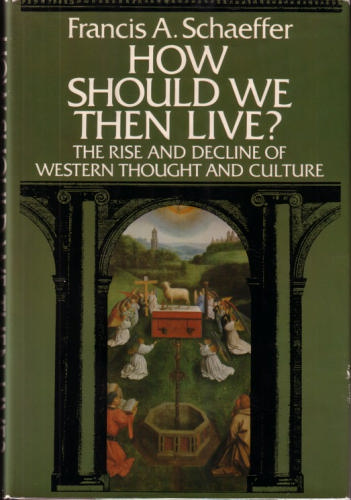 I’ve been riding my recumbent exercise bike to  the “How Then Shall We Live” DVD series by Francis Shaeffer. It’s a wonderful feeling to  exercise your body and brain together….sadly I’ve neglected both over the years. One of the perks of homeschooling though,  is that I get to have a second chance at an education. I am highly motivated this time around because I want to mentor my children.  I figure as long as I stay a week ahead it will all work out. ; )

I am thoroughly enjoying Francis Schaeffer’s  series on the rise and decline of Western thought and culture. It  surveys history—from the Roman Empire through the 20th century—and offers biblical answers to modern problems. Francis Shaeffer comes across slightly highfalutin and somewhat eccentric , but what he expresses is rich and worthy of taking note and learning.   He’s basically helping to reinforce or introduce a Christian worldview while discussing the history of western civilization. I’m grateful to Francis Shaeffer for leaving this series for us all and am eager to learn what I can about this subject. Although this series is excellent, I think I’m going to wait until my boys are in highschool before adding it to their lesson plans.  ~Anne

When all is done, when all the alternatives have been explored, “not many men are in the room” — that is, although world-views have many variations, there are not many basic world-views or basic presuppositions.
(Francis A. Schaeffer, How Should We Then Live?, Ch. 1)

No totalitarian authority nor authoritarian state can tolerate those who have an absolute by which to judge that state and its actions. The Christians had that absolute in God’s revelation. Because the Christians had an absolute, universal standard by which to judge not only personal morals but the state, they were counted as enemies of totalitarian Rome and were thrown to the beasts.
(Francis A. Schaeffer, How Should We Then Live?, Ch. 1)

It is important that the Bible sets forth true knowledge about mankind. The biblical teaching gives meaning to all particulars, but this is especially so in regard to that particular which is the most important to man, namely, the individual himself or herself. It gives a reason for the individual being great. The ironic fact here is that humanism, which began with Man’s being central, eventually had no real meaning for people. On the other hand, if one begins with the Bible’s position that a person is created by God and created in the image of God, there is a basis for that person’s dignity. People, the Bible teaches, are made in the image of God — they are nonprogrammed. Each is thus Man with dignity.

The Christian is the real radical of our generation, for he stands against the monolithic, modern concept of truth as relative. But too often, instead of being the radical, standing against the shifting sands of relativism, he subsides into merely maintaining the status quo. If it is true that evil is evil, that God hates it to the point of the cross, and that there is a moral law fixed in what God is in Himself, then Christians should be the first into the field against what is wrong.

(Be sure to stop the music before beginning this video clip)