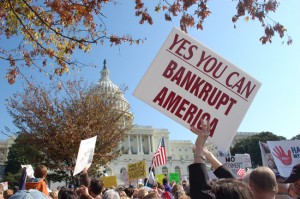 “This is a job for the printing press”

There are so many headwinds and cross currents in the market today, it is all but impossible to predict what will happen in the short term. There is too much volatility and noise. So, it pays to keep your eyes on the horizon, focused on the long term and the biggest trends.

The United States government is facing an impending fiscal crisis. Former Comptroller General David Walker calls it a “cancer growing from within.” And the wheels for this were already set in motion well before the financial crisis. With ongoing wars in Iraq and Afghanistan, a costly stimulus package and falling tax receipts, the U.S. was already neck deep in debt.

Even before the bailouts, the Office of Management and Budget (OMB) projected that the 2009 federal deficit would be nearly $482 billion. Since then however, our government has jacked up spending by the trillions. In just a few months, we have already charted a course to triple that deficit. Some experts even suggest the 2009 deficit could be as high as $2 trillion!

But, believe it or not, this is just a drop in the bucket compared to the big picture

Richard Fisher is the CEO of the Dallas Federal Reserve Bank and a member of the Federal Open Market Committee (FOMC), which sets interest rate policy. In a speech in May of this year, he stated that the total U.S. debt – including Medicare and Social Security – is more than $99 TRILLION!

Along the same lines, Laurence Kotlikoff, a Boston University economist, suggests that the “fiscal gap” – which is the difference between the number above and what we could reasonably expect to collect – is $66 trillion.

That is the definition of bankruptcy. It is just a matter of time. The scope and impact of our liabilities are stunning. But let’s play devil’s advocate and consider where this kind of money might come from.

How can we possibly meet our obligations to retirees… as well as service our debt to foreign governments… and still operate our own government?

It Won’t Come from Cuts in Spending

Let’s listen in on Fisher’s speech and consider what kind of spending cuts we would have to make to close the gap on what we owe:

So, just to meet our current and future obligations, we would have to virtually clear out Washington, D.C. And these changes would have to be made to perpetuity. Now, Ron Paul might have cut government back to its constitutionally mandated functions, but don’t expect anyone else in Washington to even consider the notion. Congress has shown that it has NO moral regard for the long term economic viability of our country.

It Won’t Come from Tax Increases

Even if we did cut the government back to the bare minimum (which we won’t), that still wouldn’t solve the problem. We would also have to raise taxes. By how much? Back to Richard Fisher:

“Similarly on the taxation side, income tax revenue would have to rise 68 percent and remain that high forever. Remember, though, I said tax revenue, not tax rates. Who knows how much individual and corporate tax rates would have to change to increase revenue by 68 percent?”

We already don’t collect enough tax revenues to pay the government’s budget. And with a recession taking hold and a depression on the horizon, where are the tax revenues going to come from? Taxation is simply not an option for this kind of money.

We Can’t Borrow it from Ourselves

During World War II, we borrowed the money we needed from ourselves. But Americans had a high savings rate then. This is no longer true. Most Americans are upside down, with credit cards, mortgages, cars and other loans… not to mention growing unemployment.

It Won’t Come from Foreigners

For many, many years, the U.S. government has been able to pay for anything and everything we wanted to by borrowing the funds from other countries. We didn’t even pay for the Iraq war… it has all been borrowed money. But other countries are beginning to balk, and for a variety of reasons.

For one thing, the countries that do have reserves to lend us are turning their attention inward. Just this week, China began to shift its policy away from plowing reserves into forex and instead is investing internally (the Chinese government announced more than a half a trillion-dollar internal stimulus package this week).

This is BAD news for the U.S. government bond market. Just as America’s spending goes parabolic and we need to sell more debt than ever, the biggest buyer just left the trading floor.

Increases in spending and liabilities along with decreases in foreign lending equals a recipe for disaster.

So, where will the money come from?

This is a job for the printing press.

While we are certainly facing deflation in the near term and a very choppy market, the groundwork has been laid for hyperinflation, soaring interest rates and exploding gold and silver prices. So forget about the short term cross currents, and focus on the long term trends you can bank on. 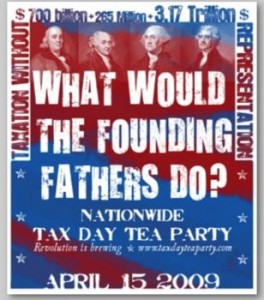 This investment news is brought to you by /Investor’s Daily Edge/. /Investor’s Daily Edge/ is a free daily investment newsletter that is delivered by email before the market opens. It’s published by Fourth Avenue Financial, a subsidiary of Early To Rise <www.earlytorise.com&gt; (an affiliate company of Agora Publishing). In each weekday issue you’ll receive practical strategies for protecting your portfolio and multiplying your money. You’ll also learn about undiscovered opportunities in emerging sectors and markets, deeply discounted stocks, recommendations for bonds, cash, commodity and real estate investing, and top ETFs. To view archives or subscribe, visit Investor’s Daily Edge <www.InvestorsDailyEdge.com&gt;.