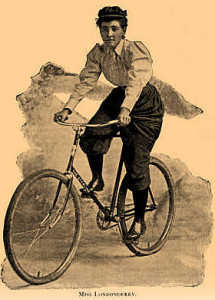 At first, I saw God as my observer, my judge, keeping

track of the things I did wrong, so as to know whether

I merited heaven, or hell when I die. He was out there,

sort of like a president. I recognized His picture

when I saw it, but I really didn’t know Him.

But later on when I met Christ, it seemed as though

life were rather like a bike ride, but it was a tandem

bike. and I noticed that Christ was in the back

changed places, but life has not been the same since.

When I had control. I knew the way. It was rather boring,

but predictable…It was the shortest distance
between two points.

But when He took the lead, He knew delightful long

cuts, up mountains, and through rocky places at

breakneck speeds, it was all I could do to hang

on! Even though it looked like madness, He said,

I worried and was anxious and asked, “Where are

you taking me?” He laughed and didn’t answer, and I

started to learn to trust. I forgot my boring life and

entered into the adventure. And when I’d say, “I’m
scared,” He’d lean back and touch my hand.

He took me to people with gifts that I needed,

gifts of healing, acceptance and joy. They gave me

their gifts to take on my journey, my Lord’s and mine.

And we were off again.

He said, “Give the gifts away; they’re extra baggage,

too much weight.” So I did, to the people we met, and

I found that in giving I received, and still our burden

I did not trust Him, at first, in control of my life.

I thought He’d wreck it; but He knows bike secrets,

knows how to make it bend to take sharp corners, jumps

I am learning to shut up and pedal in the

strangest places, and I’m beginning to enjoy the cool

breeze on my face with my delightful
constant companion, Christ.

And when I’m sure I just can’t do anymore,

He smiles and says…