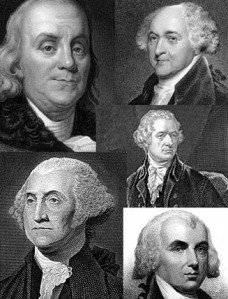 Let’s keep the conversation going shall we?  Perhaps we can put some of these quotes to memory so that we can retrieve them when faced with liberal lies and revisionist history falsehoods.

”It cannot be emphasized too strongly or too often that this great nation was founded, not by religionists, but by Christians; not on religions, but on the gospel of Jesus Christ.  For this very reason peoples of other faiths have been afforded asylum, prosperity, and freedom of worship here.” Patrick Henry

“The Congress of the United States recommends and approves the Holy Bible for use in all schools.” The US Congress 1782

“Providence has given to our people the choice of their rulers, and it is the duty as well as the privilege and interest of our Christian Nation to select and prefer Christians for their rulers.” John Jay (First Supreme Court Justice)

“The longer I live, the more convincing proofs I see of this truth: ‘that God governs in the affairs of men.’ And if a sparrow cannot fall to the ground without His notice, is it probable that an empire can rise without His aid?” – Benjamin Franklin

“I do not believe that the Constitution was the offspring of inspiration, but I am perfectly satisfied that the Union of the States in its form and adoption is as much the work of a Devine Providence as any of the miracles recorded in the Old and New Testaments.” – Benjamin Rush