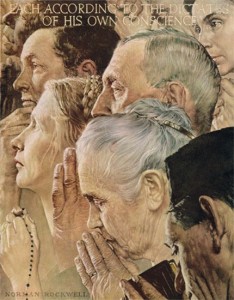 April, 2010,  U.S. District Judge Barbara Crabb ruled that the National Day of Prayer was unconstitutional saying it violates the first Amendment prohibition against laws respecting an establishment of religion.  A group of atheists from Freedom from Religion Foundation brought this case to the courts and they were rejoicing at this major victory.   Shame on Barbara Crabb.  I’d like to ask her which religion was chosen for this day of prayer?  Did we all have to attend the First Baptist church in order to pray?  We’re we required to go to our local mosque on this day to pray?  Which denomination did we have to join in order to pray,  Ms. Crabb?  Which religion was established on the national day of prayer?

Perhaps Judge Crabb  did not read about our Founding Fathers.  Perhaps she does not know the heritage of our beloved country.  Perhaps she does not realize that 95% of our founders were religious and wanted free expression of religion in the public square and in our government. She must not know that 95% of the signers of the Declaration of Independence  were Christians and we have their own writings and many documents to prove this.  Our founders did not want any particular denomination to become the established religion of the land for sure.  But they did not want religious expressions to be hid under a bushel.  I know that John Hancock wanted true freedom of religion for America as well.

By His EXCELLENCY
John Hancock, Esq.
GOVERNOR of the COMMONWEALTH
of Massachusetts.
A PROCLAMATION,
For a Day of Public Thanksgiving.

In consideration of the many undeserved Blessings conferred upon us by GOD, the Father of all Mercies; it becomes us no only in our private and usual devotion, to express our obligations to Him, as well as our dependence upon Him; but also specially to set a part a Day to be employed for this great and important Purpose:

I HAVE therefore thought fit to appoint, and by the advice and consent of the Council, do hereby accordingly appoint, THURSDAY, the seventeenth of November next, to be observed as a Day of Public THANKSGIVING and PRAISE, throughout this Commonwealth:—Hereby calling upon Ministers and People of every denomination, to assemble on the said Day—and in the name of the Great Mediator, devoutly and sincerely offer to Almighty God, the gratitude of our Hearts, for all his goodness towards us; more especially in that HE has been pleased to continue to us so a great a measure of Health—to cause the Earth plentifully to yield her increase, so that we are supplied with the Necessaries, and the Comforts of Life—to prosper our Merchandise and Fishery—And above all, not only to continue to us the enjoyment of our civil Rights and Liberties; but the great and most important Blessing, the Gospel of Jesus Christ: And together with our cordial acknowledgments, I do earnestly recommend, that we may join the penitent confession of our Sins, and implore the further continuance of the Divine Protection, and Blessings of Heaven upon this People; especially that He would be graciously pleased to direct, and prosper the Administration of the Federal Government, and of this, and the other States in the Union—to afford Him further Smiles on our Agriculture and Fisheries, Commerce and Manufactures—To prosper our University and all Seminaries of Learning—To bless the virtuously struggling for the Rights of Men—so that universal Happiness may be Allies of the United States, and to afford his Almighty Aid to all People, who are established in the World; that all may bow to the Scepter of our LORD JESUS CHRIST, and the whole Earth be filled with his Glory.

And I do also earnestly recommend to the good People of this Commonwealth, to abstain from all servile Labor and Recreation, inconsistent with the solemnity of the said day.

Given at the Council-Chamber, in Boston, the fifth Day of October, in the Year of our Lord, One Thousand Seven Hundred and Ninety-One, and in the sixteenth Year of the Independence of the United States of America.

By his Excellency’s Command,

GOD save the Commonwealth of MASSACHUSETTS!! 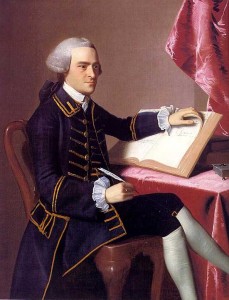