I love Abeka history.  I thought I’d share a bit of what we read today.  Sounds like good old fashioned common sense to me. ~Anne 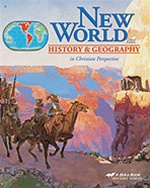 The American home in 1900 was a place where most children learned to honor their parents, to be courteous and honest in their dealings, to be obedient and submissive to authority, and to distinguish right from wrong.  The father was the head of the house, and the mother was his honored companion and helper.  Children were lovingly taught what was expected of them and lovingly punished when they disobeyed.

The Bible was read daily in many homes, and families usually prayed before meals as well as at other times.  Many families were poor by today’s standards, but they were happy, because they had values more important than money.

*A penny saved is a penny earned.

*waste not, want not.

*Cleanliness is next to godliness.

*early to bed and early to rise makes a man healthy, wealthy and wise.

*A stitch in time saves nine.

*Never put off till tomorrow what you can do today.

These and other sayings, most of which had been part of the American character since the time of Benjamin Franklin and before, helped the children of 1900 to become honest, hard-working individuals who would help our country continue prospering.