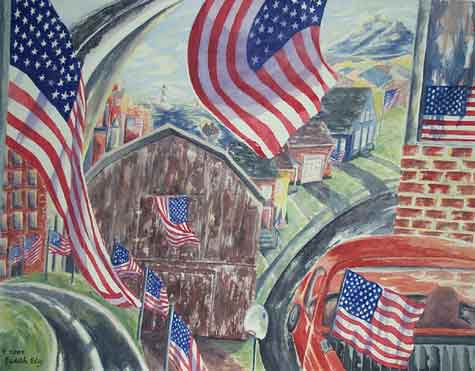 Consumers are seemingly more sensitive to buying American around the holidays than most other times during the year. Perhaps because it’s because as we search for gifts for those on our Christmas list, we run across the words “made in China” a little more often than we would like.

But now that Christmas is over and the New Year has begun, how can we continue to buy American if the bulk of our purchases, for the time being at least, are over?

The good news is that buying American doesn’t always have to involve items that are big enough or expensive enough to put under the Christmas tree, and there are more opportunities to buy American than for just big ticket items like cars, lawnmowers, or large appliances.

Some the easiest – and most inexpensive – ways to buy American are in areas where the consumer is really indifferent as to which product to buy. The good news is that when it comes to simple, everyday items like soap, deodorant, or cotton swabs, usually any product will do since the price difference is usually negligible. The even better news is that sometimes it’s even cheaper to buy American than not.

So here are eleven easy ways to buy American in 2011 using the money you’re already going to spend anyway.

1. Cotton Swabs. Don’t call them Q-Tips. The Q-Tips brand is made in America, but guess what? The company that owns the brand isn’t American at all. The name of the company is called Unilever (ever seen Lever 2000 soap?), which is a joint venture between England and The Netherlands. An American alternative would be the CVS or Walgreen’s brand, which are both made in USA as well for about the same price. Both CVS and Walgreen’s are American-owned companies and are based in the United States.
2. Deodorant. Suave and Dove are both owned by Unilever, so the profits go overseas and the taxes are paid overseas to foreign governments when you buy either of these brands. Want an American brand to buy and save money, too? Go to the Dollar Tree store and buy the Speed Stick brand for $1 each, which is made in USA by American-owned Colgate-Palmolive. If you drop five or ten dollars, you won’t have to go back to the store for this item anytime soon.
3. Bath Soap. Irish Spring sounds like it might be foreign, but it’s actually an American brand made in the United States. Ivory soap is American, too. Jergens is made in America, but Jergens is owned by a Japanese company. Think of it like this: Just like a Toyota made in the U.S. is still a Japanese car, a bar of Jergens soap made in the U.S. is still a Japanese soap. Dial is owned by a German company.
4. Mustard. French’s mustard isn’t French. It’s owned by the British. Grey Poupon sounds like it might be foreign, but it’s owned by an American company, and is made in America.
5. Pasta sauce. Did you know Ragu is owned by Unilever, the foreign-owned company we learned about in examples one and two? Prego is an American brand owned by the Campbell Soup Company, and is made in the United States.
6. Disinfectant. Lysol and Clorox are both effective disinfectants and there is little if any price difference between the two, but only one is American owned. Lysol used to be owned by Kodak, but Kodak sold it to a British company in 1995. Clorox is American owned.
7. Coffee. Two of the most popular brands in the United States are Maxwell House and Taster’s Choice, but only one is owned by a company based in the United States. Taster’s Choice is made by Switzerland-based Nestle Ð the largest food company in the world. Maxwell House is an American brand. The coffee beans for both brands are imported, however. For truly American coffee from tree to cup (the beans come from Hawaii) check out the USA Coffee Company at www.USACoffeeCompany.com.
8. Cosmetics. Revlon is an American-owned company and many (not all) of their products are made in the United States. Maybelline was American-owned until 1996 when French-owned L’Oreal bought the company for $758 million.
9. Bottled water. Now that we know the French own at least one brand many probably thought was American owned, what other popular brands are owned by companies based in France? You might be surprised to know that Dannon bottled water (and other Dannon products like yogurt) are French owned. Aquafina (owned by Pepsi) and Dasani (owned by Coca-Cola) are American brands.
10. Peanut Butter. They say choosy mothers choose Jif. Choosy patriotic Americans choose Jif, too, because Jif is American-owned. Skippy is owned by our favorite foreign brand Unilever.
11. Apparel. Why shop at Wal-Mart and buy foreign-made t-shirts when you can buy American-made t-shirts from All American Clothing Company (www.AllAmericanClothing.com) where they use 100% U.S.-grown cotton for just $7.99. Are the shirts in Wal-Mart that much cheaper? I have to admit I don’t know because I don’t shop there. But I do know Wal-Mart is the biggest seller of Chinese-made goods on the planet.
12. Okay, I had to give another example because this is probably the best one, and since winter is still here, we might be adding some hot chocolate to our shopping cart at the supermarket. Swiss Miss is American owned, but Carnation is owned by the Swiss.

The good news is that the more we buy American-owned and American-made products, the more powerful and positive impact we will have on the U.S. economy. And the even better news is we can usually do it without any extra cost or inconvenience to the consumer. Awareness is the key.

Roger Simmermaker is the author of How Americans Can Buy American: The

Power of Consumer Patriotism and writes “Buy American Mention of the Week”
articles for WorldNetDaily.com and his website www.howtobuyamerican.com.
Roger is a member of the Machinists Union, has been a frequent guest on Fox
News, CNN, and MSNBC, and has been quoted in the USA Today, Wall Street
Journal and Business Week among many other publications.