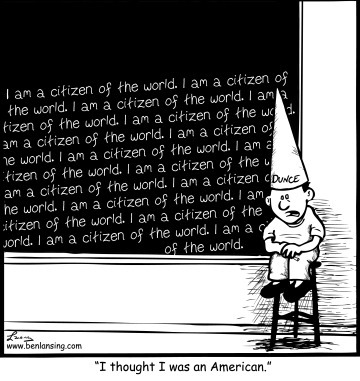 1.     Social cohesion is not possible through other means than government schooling; school is the main defense against social chaos.

2.    Children cannot learn to tolerate each other unless first socialized by government agents.

3.     The only safe mentors of children are certified experts with government-approved conditioning; children must be protected from the uncertified, including parents.

4.     In order to dilute parental influence, children must be disabused of the notion that mother and father are sovereign in morality or intelligence.

6.     Families should be encouraged to expend concern on the general education of everyone but discouraged from being unduly concerned with their own children’s education.

7.     The State has predominant responsibility for training, morals and beliefs.  Children who escape state scrutiny will become immoral.

8.     Children from families with different beliefs, backgrounds and styles must be forced together even if those beliefs violently contradict one another.  Robert Frost, the poet, was wrong when he maintained that “good fences make good neighbors.”

9.     Coercion in the name of liberty is a valid use of state power.