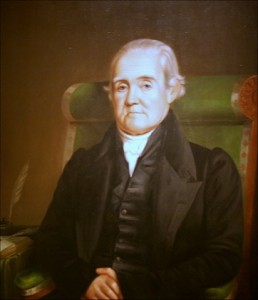 As I’m reading up on Noah Webster, I’m reminded once again of  our Christian heritage in America.  I’m offended and stunned that so many symbols of our beloved Christianity are being removed from in the public square.  I’m disturbed and grieved that Christians are not allowed to pray at graduations or other events, and that we can no longer pray in our  government schools. It seems as though our courts today believe that our founders intended to banish God from our government and public square.  How foolish they are. Our founders did not want to establish a Theocracy for sure, but they wanted to allow the influence of Christian ideals in our society.

I guess the most disturbing thing of all for me was when I saw these guards removing the 10 commandments from an Alabama  court room a few years ago.  I never could quite get over that.  Judge Moore stated,  “It is a sad day in our country when the moral foundation of our law and the acknowledgment of God has to be hidden from public view to appease a federal judge.”  This Godly man was even suspended by the Alabama Judicial Inquiry Commission  for refusing to obey Thompson’s order.  He will wear a crown one day.

We all know that our Founding Fathers would not want to eliminate this freedom of religion,  but they would be fighting for it  right along with the “tea-party” groups.  I’m sure they would be labeled extremists if they were alive today just as so many hard working Americans are these days.  Noah Webster was a patriot and one of these “extremists” and we are indebted to him for all that he left us.  May the Lord send revival again to our land.  May he change our apathetic hearts and set us on fire for him again.  May he forgive our sins and cause us to care about our Country and our God-given freedoms.  Amen!!  ~Anne

Noah Webster, who lived during the time of  our First President, was known for his ” Blue back Spellers” and the  Webster’s Dictionary. He was  one of our Founding Fathers who called for a Constitutional Convention; and was the most active in calling for the acceptance and ratification of our Constitution.

Noah Webster spoke of his conversion to Christianity in a letter he wrote to Thomas Dawes on December 20, 1818.  He wrote,  “About a year ago, an unusual revival of religion took place in New Haven…and I was lead by a spontaneous impulse of repentance, prayer, and entire submission of myself to my Maker and Redeemer. In the month of April last, I made a profession of faith.”  This unusual revival was a part of the Great Awakening that shook America in the early 19th Century.

Noah believed that Christianity and government should not be separated.  “The religion which has introduced civil liberty is the religion of Christ and His apostles, which enjoins humility, piety, and benevolence; which acknowledges in every person, a brother or a sister, and a citizen with equal rights. This is genuine Christianity, and to this we owe our free constitutions of government.”

He is also quoted as saying: “Every civil government is based upon some religion or philosophy of life. Education in a nation will propagate the religion of that nation. In America, the foundational religion was Christianity. And it was sown in the hearts of Americans through the home and private and public schools for centuries. Our liberty, growth, and prosperity was the result of a Biblical philosophy of life. Our continued freedom and success is dependent on our educating the youth of America in the principles of Christianity.”

Noah Webster had much to say about education. He believed that the study of civics was essential in order to promote unity and a sense of national spirit in our young nation.  He stated: “But every child in America should be acquainted with his own country. He should read books that furnish him with ideas that will be useful to him in life and practice. As soon as he opens his lips, he should rehearse the history of his own country; he should lisp the praise of liberty, and of those illustrious heroes and statesmen, who have wrought a revolution in her favor.

A selection of essays, respecting the settlement and geography of America; the history of the late revolution and of the most remarkable characters and events that distinguished it, and a compendium of the principles of the federal and provincial governments, should be the principal school book in the United States. These are interesting objects to every man; they call home the minds of youth and fix them upon the interests of their own country, and they assist in forming attachments to it, as well as in enlarging the understanding.”