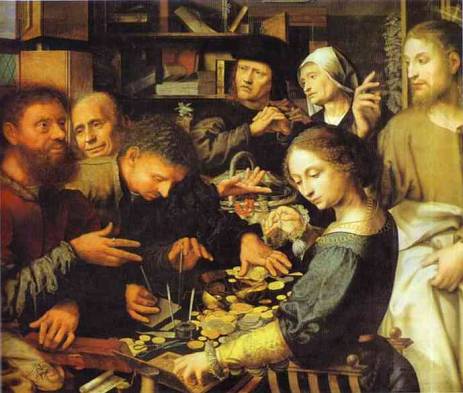 Taxation~ Civics Lesson 17
Government Must Take Before it can Give

I don’t think I really started caring about taxes until I was married with children and a home. When funds are low and you never seem to be able to catch up, you begin wondering where all the money goes.  Much of our income goes to paying taxes in one form or another. Lesson 17 on Taxation taught us about taxes.  In exchange for taxes, the government gives people the services of government workers and the use of roads, parks, etc.   In a way,  the citizens are allowing the government to take from one group and give to another. Increased Taxation is frequently caused by political pressure groups which demand money for their own pet projects. When the government gives into these groups, and taxes excessively,  folks will rise up in protest just as they are doing today in the Tea Party rallies. The Land of Fair Play explains that when citizens resist the over-stepping of government they are actually helping to preserve liberty. It is important to note that never ever in history has a government endowed with unchecked power chosen to use that power to preserve the God-given liberties of the people.

Did you know that everyone pays taxes?  Some folks believe that because they do not pay anything directly to a tax collector, they are not paying taxes. Everyone pays taxes because most taxes are shifted in some way. You will be charged more for rent or a product no matter what if the tax burden has increased for someone. Taxes which can be shifted are called “indirect” taxes. There is also a tax called a tariff. The importer of  foreign made goods pays the tax to the government and then collects  it from the retailer who in turn collects if from you. The tariff is part of his cost which you eventually pay in the end.

The national government collects taxes and the States collect taxes. There is the tariff. There are excise taxes on whiskey and tobacco. (An excise tax is a tax on a domestic product-an internal revenue tax)  When expenses of the national government are too high taxes are levied on many other things, such as cars, jewelry and other luxuries. An inheritance tax has also been used by the government which is a tax on all the property of a person who dies.

The Sixteenth Amendment to the Constitution passed in 1913, removed the restriction upon income taxes and now an income tax has  become a large source of national revenue. There is also custom duties. These duties are collected at the custom-houses in our ports upon the arrival of the goods.

Bonds– The revenue from taxes should be enough to cover government expenses. If  not,  money must be borrowed. This is done through the issue of government bonds;  which are simply the government’s promise to pay a certain sum with interest after a certain number of years. The total of bonds owed by a government is called its “national debt.”   Now due to the reckless spending of our  government our national debt is over 13 Trillion dollars!!!!

In the past real estate and land tax was thought to be immoral. Property taxes were considered Anti-Family, Anti-God and Anti-private property. Folks need to know that the power to tax a piece of property dictates who is ultimately in control of that property. The power to tax property is the power to confiscate property!!! It amazes me that our State of California elected Jerry Brown for governor (again) even though he wanted to get rid of Prop. 13 which limits property taxes. What is wrong with Californians anyway? How are they going to be able to pay the taxes on their property when they are retired…or ill, or they lose their job.

Many folks in CA have lost their homes because they could not afford to pay the taxes even though there mortgage is paid. Personally…I agree with the above statement. Property taxes are anti-family, anti-God and anti-private property!!
Tax Rate– Before a tax rate is fixed the value of the property must be assessed. The tax rate is usually 2 %. IF your home and lot are assessed at $50,000 your share of the tax will be $1000. Imagine if your home is assessed at $300,000 That’s a lot of money for a family to come up with.

Most states impose taxes on personal income thus subject citizens to a double tax since the national government also taxes incomes. Other taxes include a Sales Tax, Corporation tax, Licenses and Fees, Franchise Tax, Assessments and Bonds. All our local governments issue bonds to pay for permanent improvements. The purpose is exactly the same as in the case of national bond issue. School districts issue bonds to borrow money for new schools. The same is true of sewers, water works and other improvements. Issuing bonds is mortgaging future generations, and a community should be very careful that future taxpayers will share the benefit.

My prayer is that our families, cities, states and Country would begin to live by the Constitution and the Bible again.  I pray that we all will be wise stewards of all that the Lord has given us.   May the Lord have mercy upon us and forgive our sins.  Amen.

If you are interested in reading more from our Civics lessons please check out our Civics 101 on this site.  Blessings,  Anne