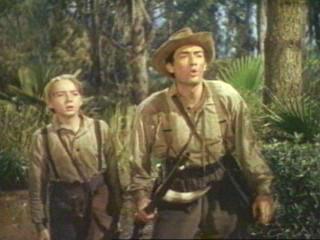 We finally finished reading The Yearling, and still I’m thinking about the characters.  It was a long book for us and written in a dialect we were not used to, but my heart became attached to these poor authentic country folks living in the backwoods of  post-civil war Florida who struggled to simply live and make ends meet. This story although considerably long on descriptions, was quite moving, tender and realistic.  I find myself thinking about this boy Jody, and wanting to know more.  I want to have coffee with the Mother Ora because I know her heart was lonely and sad.

One reason we decided to explore this particular book was because it is a definite boys book with plenty of  adventures…and yet it allows the reader to get an intimate view of the hardships, struggles and successes of the Baxter family. There were many adult themes in this story (death, starvation, rattle snake attacks, devastating floods etc.)  so I would hesitate to read to very young children, but the life lessons were so profound that I would not want to skip reading this at the proper age.

Although we’ve watched this old classic film several times, the book described in detail so much more than the movie did.  The film emphasized the relationship between the boy (Jody) and his pet fawn (flag).  In the novel the main relationship was between the boy and his dad.

The Yearling was about the Baxter Family who lived in the rural backwoods of Florida.  They were a sincere and very down-to-earth family who had suffered the loss of all their children except their son Jody.  The Mother Ory was heartbroken and somewhat hardened, and the Dad, Penny, was a survivor and devoted mentor to his only son Jody. He struggled most of his life, and worked hard as a boy.  He wanted Jody to have more of a childhood than he did and often allowed him extra time to romp in the woods rather than finish his chores. Penny allowed Jody to raise an orphaned fawn in order to ease some of his loneliness but this pet who was Jody’s pride and joy became a threat to the Baxter families survival as it repeatedly destroyed the crops. Jody grows up during the year that the his fawn becomes a yearling and through  difficult hardships discovers  that life is often very brutal but still worthwhile and  good.

While visiting their nearest neighbors: the uneducated and rough Forrester family, the Baxters are invited to “et dinner”   Ma Forrester ladled food into pans big enough to wash in. The long trenchered table was covered with steam. There were dried cow peas boiled with white bacon, a haunch of roast venison, a platter of fried squirrel, swamp cabbage, big hominy, biscuits, cornbread, syrup and coffee. A raisin pudding waited at the side of the hearth. “If I knowed you was comin,” she said, “Id of cooked somethin’ fitten. Well draw up.”

Marjarie Kinnan Rawlings was awarded the Pulitzer Prize for this wonderful historical fiction novel in 1938. I recommend it as a family read aloud…perhaps one to read on a road trip or vacation when there is no competition from the television or computer.
~Anne