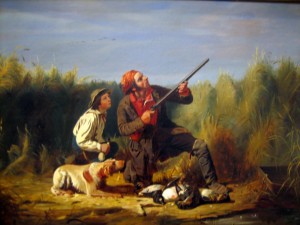 This poem by Edgar Guest, I dedicate to my husband who is the story teller in our family.  I’m  blessed to have a man  who is devoted to making memories with his boys; jealously guarding his evening  time of praying and reading with them.  Even now that they are growing into young men, he spends this time, laughing, reading, praying and roughhousing with them  each night. Often times I’m the “grown-up” who  reminds them that its time to sleep….because they are having too much fun to watch the clock.  Yes, this poem definitely  describes my honey.  ~Happy Father’s Day

Most every night when they’re in bed,
And both their little prayers have said,
They shout for me to come upstairs
And tell them tales of gypsies bold,
And eagles with the claws that hold
A baby’s weight, and fairy sprites
That roam the woods on starry nights.

And I must illustrate these tales,
Must imitate the northern gales
That toss the native man’s canoe,
And show the way he paddles, too.
If in the story comes a bear,
I have to pause and sniff the air
And show the way he climbs the trees
To steal the honey from the bees.

And then I buzz like angry bees
And sting him on his nose and knees
And howl in pain, till mother cries:
“That pair will never shut their eyes,
While all that noise up there you make;
You’re simply keeping them awake.”
And then they whisper: “Just one more,”
And once again I’m forced to roar.

New stories every night they ask.
And that is not an easy task;
I have to be so many things,
The frog that croaks, the lark that sings,
The cunning fox, the frightened hen;
But just last night they stumped me, when
They wanted me to twist and squirm
And imitate an angle worm.

At last they tumble off to sleep,
And softly from their room I creep
And brush and comb the shock of hair
I tossed about to be a bear.
Then mother says: “Well, I should say
You’re just as much a child as they.”
But you can bet I’ll not resign
That story telling job of mine.