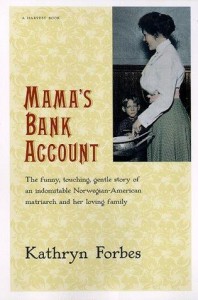 Mama’s Bank Account by Kathryn Forbes is an easy and enjoyable read from beginning to end…especially if read with a Norwegian accent. 🙂  This story about a Norwegian American family living in San Francisco in 1910, is heart-warming and filled with important life lessons.  The story told by the oldest daughter (Katrin), is focused upon everyday family life, brothers, sisters, Papa….but mostly Mama.  Marta Hanson (Mama) has wisdom, mercy, understanding and plain old common sense brought with her from the old country.   She is proud of her Norwegian heritage but not living in the past, embraces all that America has to offer and eventually is more American than Norwegian.   So much of what Mama believes and values, reflects the American ideals that have made our country great.  Hard work, frugality,  family,  ingenuity, tenacity and sacrifice were some of the values that Mama tried to instill in her family.  She is also just stubborn enough to find a way when there was no way.  Her character is an inspiration to me because she really is the ultimate “keeper-at-home,” devoted to her family and husband (Lars).  This story also became a play and television series in the late 40’s.  If you want a relaxing escape from our modern rat-race make a nice cup of coffee (not tea) and read Mama’s bank account….don’t forget to read all of Mama’s words in a Norwegian accent…’is  good that way.” ~Anne