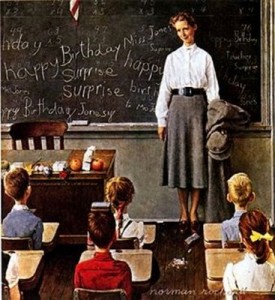 Charter schools are just public schools on a slightly longer leash. A dog on a long leash is still a dog on a leash.
— Marshall Fritz

All men who have turned out worth anything have had the chief hand in their own education.
— Sir Walter Scott

The philosophy in the classroom of this generation is the philosophy of government in the next.
— Abraham Lincoln

Our schools have been scientifically designed to prevent over-education from happening. The average American [should be] content with their humble role in life, because they’re not tempted to think about any other role.
— William T. Harris, U.S. Commissioner of Education, 1889

We who are engaged in the sacred cause of education are entitled to look upon all parents as having given hostages to our cause.
— Horace Mann, first secretary of education in the Commonwealth of Massachusetts

[The role of the schoolmaster is to] collect little plastic lumps of human dough from private households and shape them on the social kneading board.
— Edward Ross, Professor of Economics, Stanford University, 1900

The education of all children, from the moment that they can get along without a mother’s care, shall be in state institutions at state expense.
— Karl Marx

The children who know how to think for themselves spoil the harmony of the collective society which is coming, where everyone would be interdependent.
— John Dewey, American educator

The only time my education was interrupted was when I was in school.
— George Bernard Shaw

My schooling not only failed to teach me what it professed to be teaching, but prevented me from being educated to an extent which infuriates me when I think of all I might have learned at home by myself.
— George Bernard Shaw

I suppose it is because nearly all children go to school nowadays and have things arranged for them that they seem so forlornly unable to produce their own ideas.
— Agatha Christie

Thank goodness I was never sent to school; it would have rubbed off some of the originality.
— Beatrix Potter

A child educated only at school is an uneducated child.
— George Santayana

We must create out of the younger generation a generation of Communists. We must turn children, who can be shaped like wax, into real, good Communists…. We must remove the children from the crude influence of their families. We must take them over and, to speak frankly, nationalize them. From the first days of their lives they will be under the healthy influence of Communist children’s nurseries and schools. There they will grow up to be real Communists.
— Communist Party Education Workers Congress (1918)

What’s the difference between a bright, inquisitive five-year-old, and a dull, stupid nineteen-year-old? Fourteen years of the British educational system.
— Bertrand Russell

My grandmother wanted me to have an education, so she kept me out of school.
— Margaret Mead

Creativity is a type of learning process where the teacher and pupil are located in the same individual.
— Albert Einstein

At every hour of every day, I can tell you on which page of which book each school child in Italy is studying.
— Benito Mussolini

Schools have not necessarily much to do with education… they are mainly institutions of control, where basic habits must be inculcated in the young. Education is quite different and has little place in school.
— Winston Churchill

There are only two places in the world where time takes precedence over the job to be done. School and prison.
—William Glasser

The group consisting of mother, father and child is the main educational agency of mankind.
— Rev. Martin Luther King, Jr