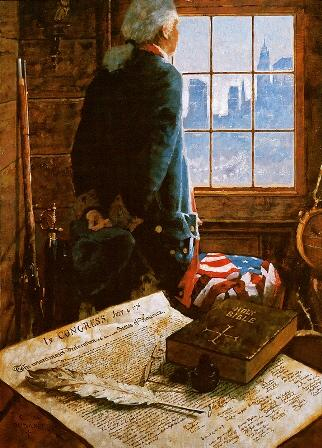 I came across this poem over 10 years ago and now as I read it, it seems more relevant now then it was then.  It was written in 1986…how did the author know where we were headed? How did he know we would let our liberties just slip away without even a fight?

I had a dream the other night, I didn’t understand.

A figure walking through the mist, with flintlock in his hand.

His clothes were torn and dirty, as he stood there by the bed,

He took off his three-cornered hat, and speaking low, he said:

“We fought a revolution, to secure our liberty.

We wrote the Constitution, as a shield from tyranny,

For future generations, this legacy we gave,

In this, the land of the free and the home of the brave.”

“The freedom we secured for you, we hoped you’d always keep.

But tyrants labored endlessly, while your parents were asleep.

Your freedom gone, your courage lost, you’re no more than a slave,

In this, the land of the free and the home of the brave.”

Permits to start a business, or to build a place for one.

On land that you believe you own, you pay a yearly rent,

Although you have no voice in choosing how the money’s spent.”

“Your children must attend a school that doesn’t educate.

Your Christian values can’t be taught, according to the state.

You read about the current news, in a regulated press.

“Your money is no longer made of silver or of gold.

You trade your wealth for paper, so your life can be controlled.

You pay for crimes that make our nation turn from God in shame,

You’ve taken Satan’s number, as you’ve traded in your name.”

“You’ve given government control to those who do you harm,

So they can padlock churches, and steal the family farm,

And keep the country deep in debt, put men of God in jail,

Your daughters visit doctors so their children won’t be born.

Your leaders ship artillery and guns to foreign shores,

And send your sons to slaughter, fighting other people’s wars.”

“Can you regain freedom for which we fought and died?

Or don’t you have the courage or the faith to stand with pride?

Are there no more values for which you’ll fight to save?

Or do you wish your children to live in fear and be a slave?”

“Sons of the Republic, arise and take a stand!

Defend the Constitution, the Supreme Law of the Land!

Preserve our great republic and each God-given right,

And pray to God to keep the torch of freedom burning bright!”

As I awoke he vanished, in the mist from which he came.

His words were true, we are not free. We have ourselves to blame.

For even now as tyrants trample each God-given right,

We only watch and tremble, too afraid to stand and fight.

If he stood by your bedside, in a dream while you’re asleep,

And wondered what remains of our rights he fought to keep,

What would be your answer, if he called out from the grave?

Is this still the Land of the Free and the Home of the Brave? 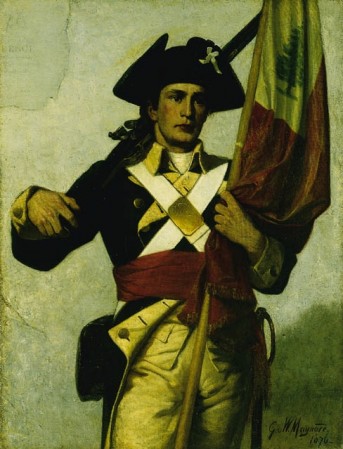