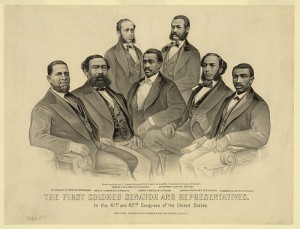 Today while we enjoyed our lunchtime meal we watched another  history lesson from American Heritage Series by David Barton. We discovered all of the Black Americans who were members of Congress in 1872.  Did you know that they were all Republicans and were responsible for passing many civil rights laws? Because this episode was so interesting, and the information was something I was never taught in school,  I’m going to watch it several more times. We found out that many of our Black founding fathers were devout Christians and pastors.  We learned that President Woodrow Wilson did not support Civil Rights legislation and also fired the blacks who had positions in government? He also was a KKK member!  Did you know that Teddy Roosevelt did just the opposite and chose Booker T. Washington to work with him?  I find it ironic that there are over a dozen schools named after Woodrow Wilson. Why would we give him so much honor…perhaps we did not read our history books.  Perhaps we’ve been taught revisionist history? We were blessed to hear  about a Godly founder named Frederic Douglass who reminded us of the proverb Righteousness exalteth a nation: but sin is a reproach to any people.

Well, I’m ashamed to admit that I am just learning these truths.  I’m on a mission though to keep on learning and telling others of our forgotten history.  Won’t you join me?  Blessings,  Anne